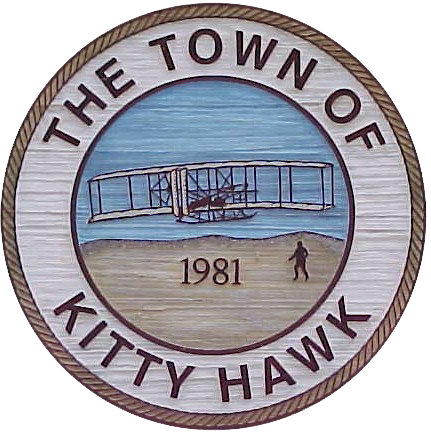 The residents of the Town are represented by a five member Town Council. Prior to the election held in 2005, the members of the Town Council elected a Mayor from within the Council. In 2004, a ballot initiative for the direct election of a Mayor was passed by the voters of Kitty Hawk. Beginning in 2005, the voters will select the Mayor by direct election. Members of the Council are elected to four year terms, and these terms are staggered.

The Council meets on the first Monday evening of each month at 6:00 pm at the Town Hall. They make all local policies and have the final decision-making authority on planning matters. The Council also appoints members to other boards and committees.

Anyone may speak at a Town Council meeting on any subject matter during the Public Comment portion of the meeting. During the Public Hearing portion of the Town Council meetings, interested parties may speak on the specific planning item or zoning issue that is on the agenda. Please sign up with Town Clerk Lynn Morris before speaking so that she may enter your name into the record.

The Council members can receive mail at their home mailing address or at Town Hall. If mailing a letter to them at Town Hall, the address is PO Box 549, Kitty Hawk, NC 27949. To send an email to the members of the Town Council click here.

The Town of Kitty Hawk operates under the council-manager form of government.  The residents elect a five-member Town Council that makes policy.  The Town Manager and staff implement the policies created by the Council. The professional staff is charged with enforcement of the policies made by the Council.

Mr. Garriss was elected as Mayor in 2021.  He first was elected to the Town Council in November of 2013 and re-elected in 2018.  He was also selected as Mayor Pro Tem in December of 2015,  2017 and 2019.  His current term as Mayor will expire in December 2025.   Prior to serving on Council, he served on the Town Board of Adjustment in 2006 and was appointed to the Kitty Hawk Planning Board in 2007.  In 2011 Mr. Garriss was selected as Planning Board Vice Chair, a position he held until being elected to Council.  Mr. Garriss is a retired Lieutenant with the North Carolina Highway Patrol and is also retired from Vidant Police, attaining the rank of Major. He is currently a Qualified Assistant/Instructor with the College of the Albemarle’s Basic Law Enforcement Training program.

Ms. McClean was elected to the Town Council in November 2015 and re-elected in 2019.  Her current term will expire in December 2023.  She served on the Planning Board as an alternate from July 2001 until April 2003 and from July 2011 until being moved to a regular member in July 2013.  Ms. McClean was appointed as Vice-Chair in December 2013 and served until being elected to council.

She is currently the Town’s representative on the Dare County Land Transfer Tax Appeals Board and the Albemarle Commission Transportation Advisory Committee.

Mr. Hines was elected to the Town Council in November of 2019.  His term will expire in December 2023.  He was appointed to the Town’s Board of Adjustment in July 2018 and served until his election to council. He currently serves on the Dare County Planning Board representing District 3 (Kitty Hawk, Southern Shores, Martins Point and Duck).

Mr. Hines is a business partner in Coastal NC Holdings which has been involved in real estate development since 2008. Their brokerage firm, Coastal NC Realty Group, was started a few years ago. He began his real estate brokerage career in 2004 with Coldwell Banker Seaside Realty.

Ms. Walker was elected to Town Council in November 2021.  Her current term will expire in 2025.  Ms. Walker also has served on the Town’s Board of Adjustment and Recreation Committee.
Phone:  (321) 446-3744
Email:  Councilwoman Walker
[email protected]

Monday with the Mayor